The intent of this section is to improve the voting process in Nevada County, limiting the impact of money on our elections, encouraging greater voter participation, giving voters more choice and greater fairness in the election process.

The two components intended to accomplish this are the introduction of Instant Runoff Voting (IRV) and limits on campaign expenditures.

Instant Runoff Voting allows voters to rank candidates in order of preference (i.e. first, second, third, fourth and so on). Voters have the option to rank as many or as few candidates as they wish, but can vote without fear that ranking less favored candidates will harm the chances of their most preferred candidates. First choices are then tabulated, and if a candidate receives a majority of first choices, he or she is elected. If nobody has a clear majority of votes on the first count, the candidate who receives the fewest first place choices is eliminated. All ballots are then re-tabulated. The ballots for voters whose top choice was eliminated will now count their next highest choice as their first choice. This process is repeated until the weakest candidates are successively eliminated. 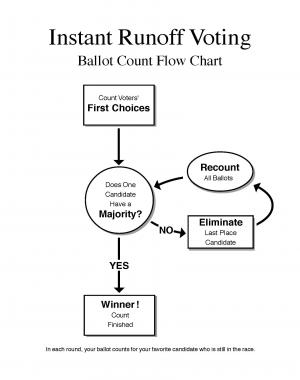 Instant runoff voting allows for better voter choice and wider voter participation by accommodating multiple candidates in single seat races and alleviating the “spoiler effect,” which can result in undemocratic outcomes. IRV allows all voters to vote for their favorite candidate, while avoiding the fear of helping elect their least favorite candidate. It ensures that winners enjoy majority support when matched against their top opponents.

IRV can save the County and candidates money by eliminating the need for runoff elections. More information on IRV is available on The Center for Voting and Democracy website.

In order to keep it affordable for Nevada County citizens to run for county elected positions, giving us the greatest choice in candidates and in order to keep outside money out of our elections, this charter establishes:

Spending and donation reporting will be required on at least a monthly basis and these reports will be made public on the county website for public fact checking.

To give campaign finance limits teeth, violation would result in removal from office and prohibition from holding any future county elected office. If an office holder is removed on that basis, the IRV results from the most recent election would be used to offer the position to the candidate last eliminated until one accepts.  If that process does not fill the position, it would be filled by appointment of the BOS.

Additionally, this section describes the procedure for amending or repealing the charter.

Nevada County shall implement Instant Runoff Voting (IRV) in the elections of all candidates for county offices.

The Board of Supervisors will pass an ordinance specifying campaign finance limits for each County elected office. The initial campaign finance limits shall be $5,000 in spending per candidate for county wide office/$3,000 for district office, including independent spending by supporters, in total per election (excluding filing fees) and $100 in donations per individual or organization to any candidate per election. The Board of Supervisors shall establish a minimum of monthly reporting requirements for donations and spending. The county Elections office shall make all reports public on the MyNevadaCounty.com website within 3 business days of each filing deadline in order to provide of public fact checking.

The county shall provide each properly registered candidate a page and blog on the MyNevadaCounty.com website, at no cost to the candidate.

The county shall publish a candidate statement for each properly registered candidate in the sample ballot/voter information pamphlet mailed prior to the election, at no cost to the candidate.

Campaign finance limits will be reviewed and, if appropriate, revised prior to each election, such revision to take place no later than 180 days before the election. Further, the Board of Supervisors may disallow funding from outside the County and may institute public financing of campaigns.

Once ratified, an amendment or repeal of this charter may be proposed by the Board of Supervisors or by a petition signed by at least 10% of the electors who voted at the last gubernatorial election. Thus qualified, the amendment or repeal shall be placed before the voters at the next general or special countywide election. Alternatives may be voted on at the same election. If a majority of the voters voting in the election vote in favor of the amendment or repeal, it is deemed ratified and takes effect when filed by the Secretary of State. If the provisions of two or more measures that are approved at the same election conflict, the measure receiving the highest number of affirmative votes shall prevail.

Links to other Charter pages:

Click here to be taken to the Nevada County Charter online survey page.